Like most of us in the UK, I find myself spending all my time in the local neighbourhood. Having explored every corner, noticing new paths and little digressions with newly found curiosity, I am growing increasingly tired of the same configurations of walks, sequences of streets and local parks. Additionally, unlike in the recent past, the streets and parks are now very busy, with so many people exercising their curtailed freedom in the domain of the local.

So that solitude has shifted into the most unlikely places.

This is where I find myself now. 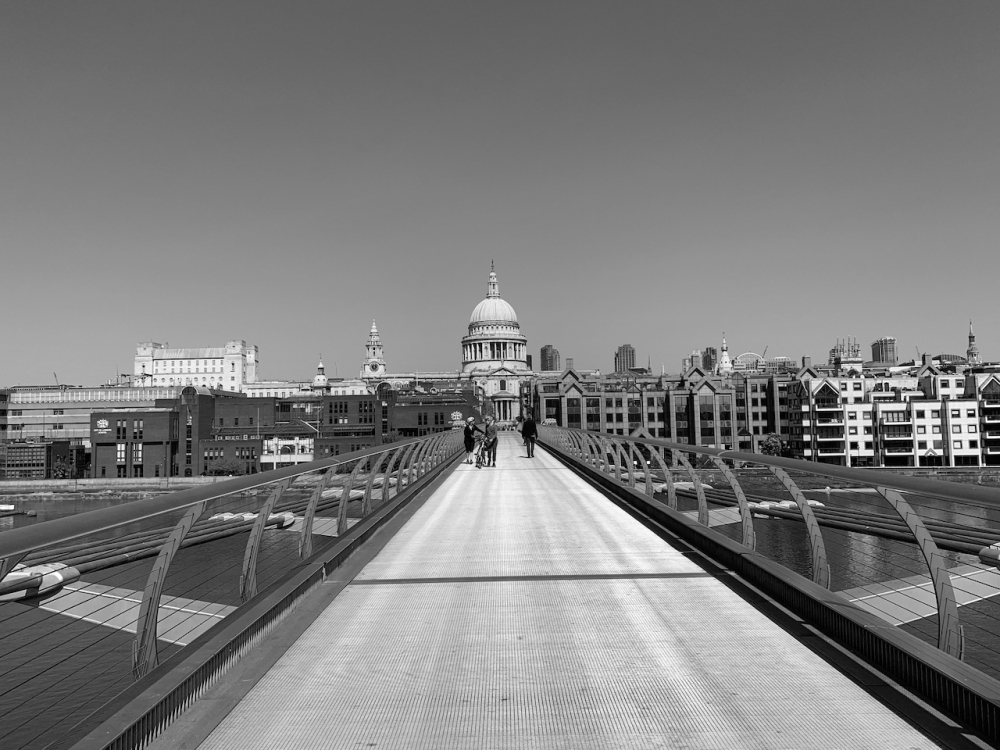 To be precise, I am standing on the Millennium Bridge that takes one to Tate Modern. Crossing the pedestrian bridge, deserted by its usual crowds of tourists, I am struck by the silence. It is not an absence of sound: I hear the sound of a distant car, some banging, a voice. But these are individual sounds, they are not part of the overwhelming hum that normally resonates across the city, spilling into the most remote corners of the largest parks. There is a sense of an aural space, where separate sounds can be located and often traced to their source. In between these, there is silence. The experience is relaxing, peaceful, as if a layer of deeply vibrating anxiety has been removed. 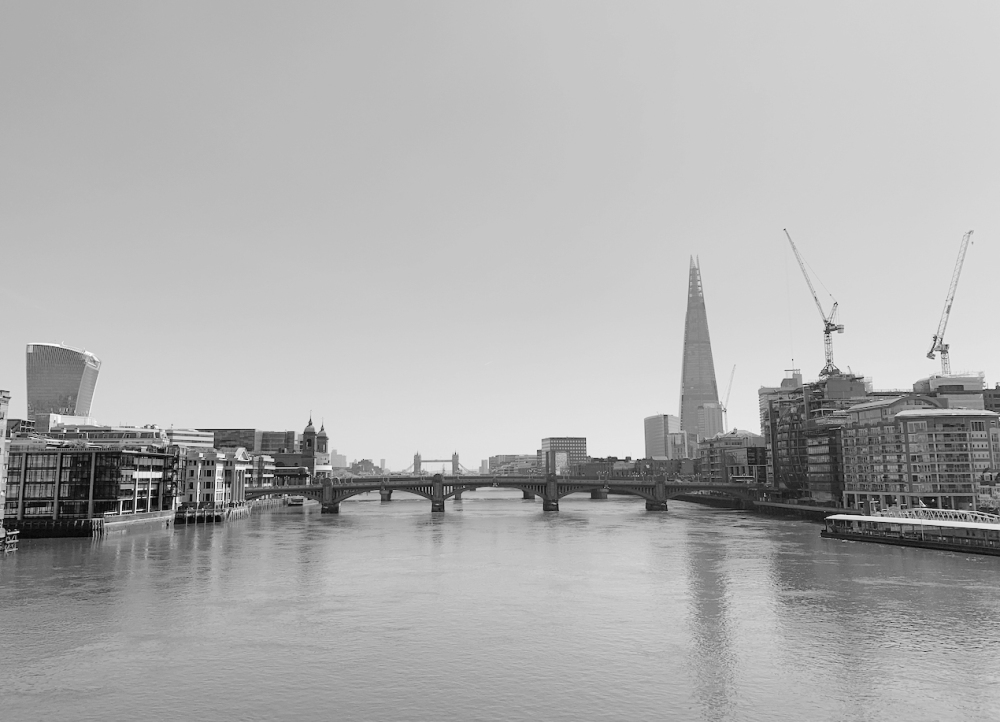 The area outside of Tate Modern, normally a manic junction of crossing paths and intentions, bodies and languages, is now empty. Instead of feeling strange or even sad, I feel at home. On an empty stage, a city between its performances of “metropolitan life”, London feels, to me at least, more honest. Or rather, more open. More open to possibilities of different narratives, unimagined twists in its story. This to me is exciting. Possibly because this realisation of the unpredictability of fate jolts me into wakefulness, heightened awareness of the present moment. No longer comforted by a false sense of continuity, life wakes into colour. 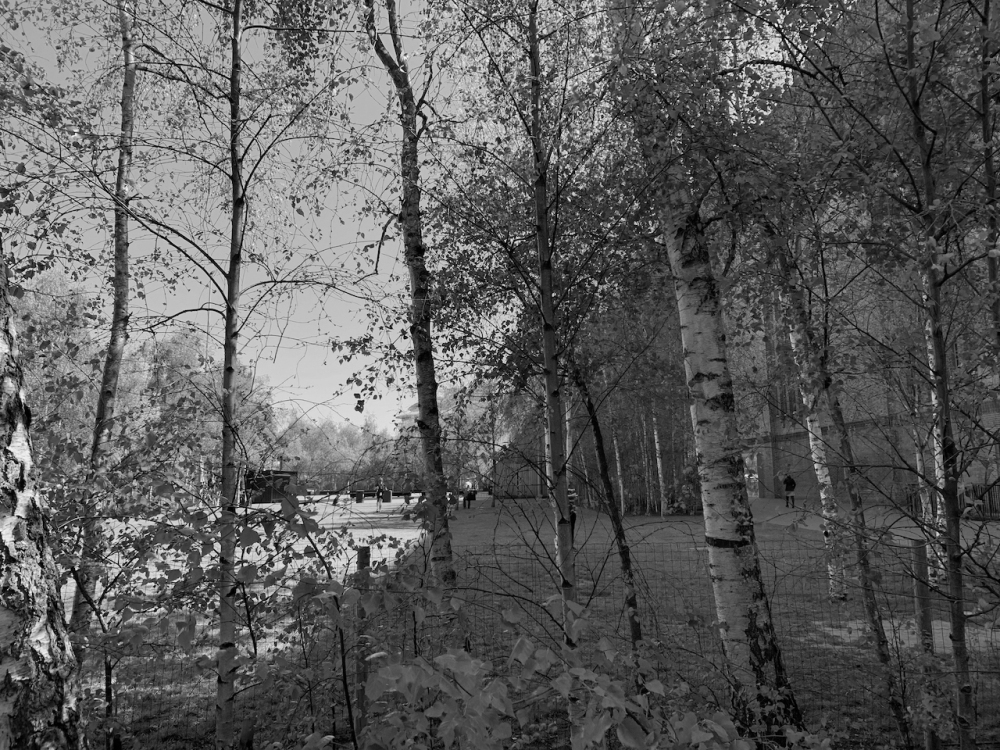 At the same time, the presence of nature takes on a different meaning. Not just a pleasing little decoration to comfort the tired eye of the city dweller, these tamed silver birches become a reminder of nature’s tenacity, which, if left unchecked, will see a city turned into an urban jungle of weed, in a surprisingly short space of time. Yet again, I find this idea exuberant, as I imagine Tate Modern transformed into an abandoned crumbling monument in the middle of a sprawling forest. And inside pigeons making nests on Henry Moore sculptures. 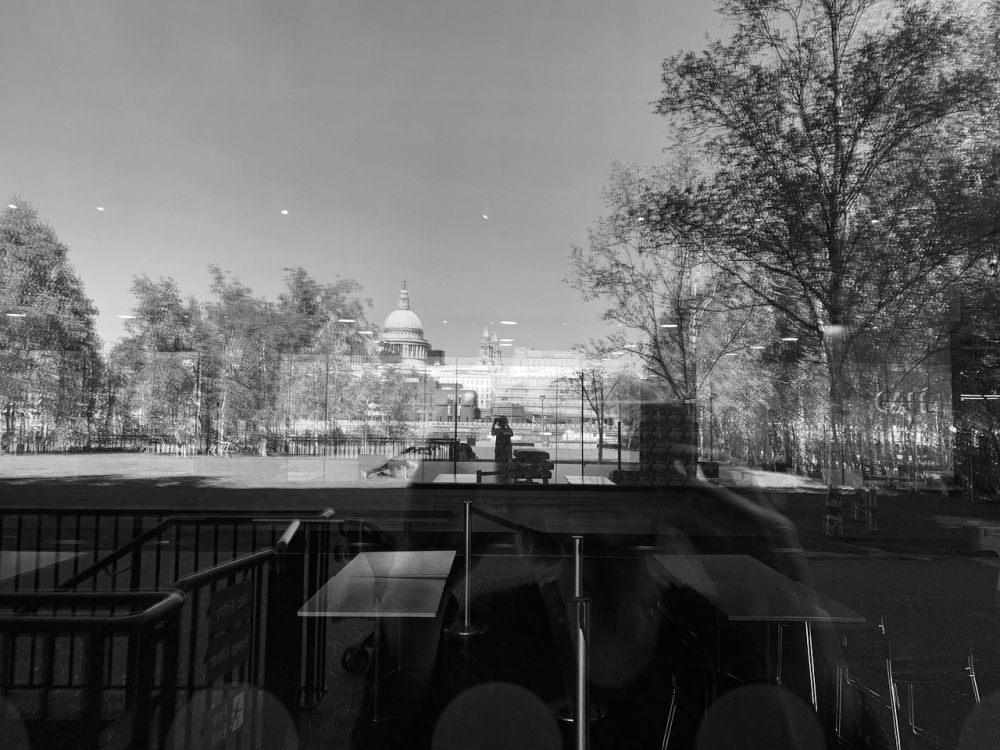 The one thing that does bring a feeling of sadness is the sight of posters for art exhibitions. Some or maybe all of which we may never get to see in their current curatorial configuration because they will finish before the lockdown is over. All the work that has gone into this by people, for people. Yet people will not experience it. All this work in there, on display, for nobody. Unlike the large architectural structures, the bridges, the buildings which will survive us, these exhibitions feel much more like us, limited by a brief window of time, fleeting in the scheme of the larger world. 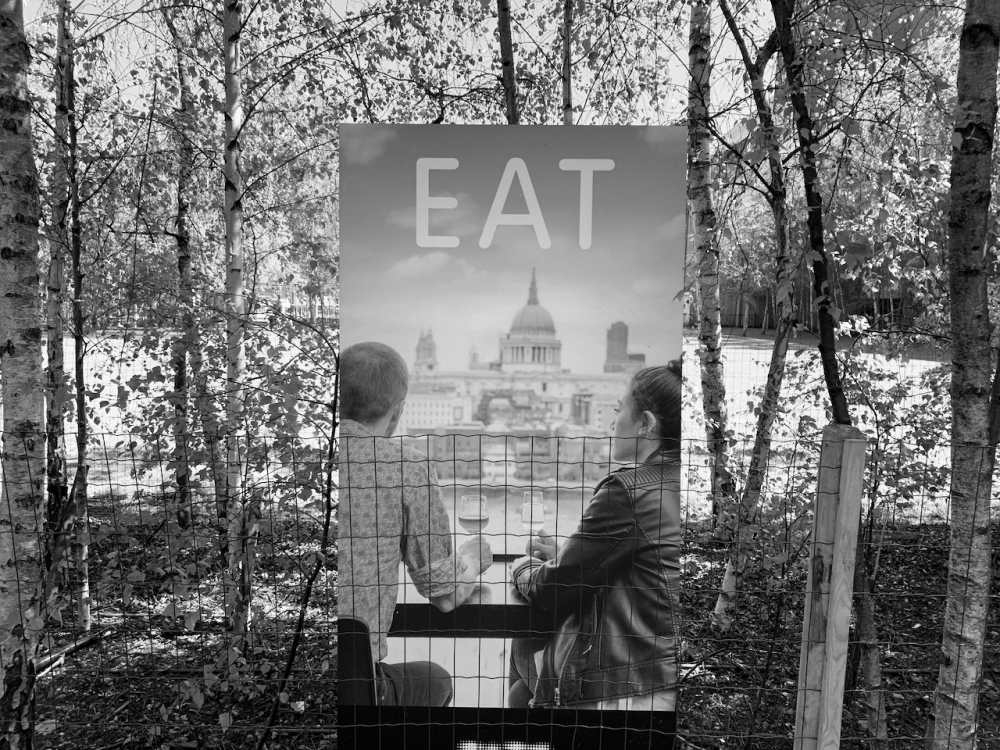 And then my attention is drawn to a poster advertising a restaurant. The image, in its new, unintended-for context, becomes a window into a different world. The two people here are facing St Paul’s Cathedral. They are looking at (but not into) the deep past of London with the occupants of that era long gone. These two are not really thinking about the distant generations who witnessed or participated on the construction of St Paul’s. I doubt they sit there, sipping their wine, while imagining anything of that other reality so removed from theirs.

But I am thinking it, as I look at them not looking at the past in front of them. This is because I am standing in the centre of London, in the middle of a pandemic that cleared humans out of its streets and public spaces and deposited them in their local neighbourhoods, while I found some solitude in the most unlikely of places. I am thinking all this because this strange, imposed, unwanted, intriguing pause in the daily reality has made it possible to think like this. I am thinking it because these two people are now in a silver birch forest doing things that are forbidden to us like drinking wine together in a bar in Tate Modern, while not really looking at anything much.

So while the cathedral stands noble and meaningful, even ageless, the two poster people in front of me appear trivial in their lack of (existential) “weight”, already out of date. It is this clash of timescales and weights that makes this “image” so interesting to me.

It strikes me in fact, that they are the perfect depiction of our previous existence, down to the letters hovering in the skies above St Paul’s.

Not THINK, not IMAGINE, not REFLECT, not DREAM.

I am of course reminded of Jan Svankmajer and his musings on our western society, which consumes everything that comes in its way. This couldn’t be more expressive.  Here now, outside an iconic art gallery, at the time of a pandemic, what remains after us is the word EAT. In the absence of any available food in sight, this becomes even more surreal. 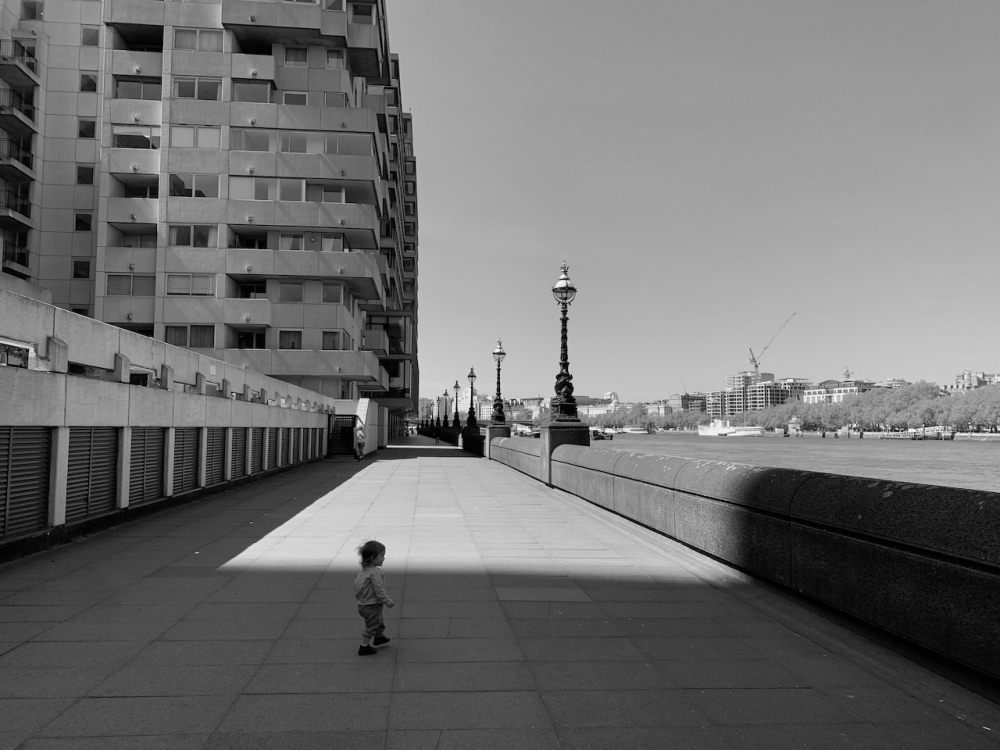 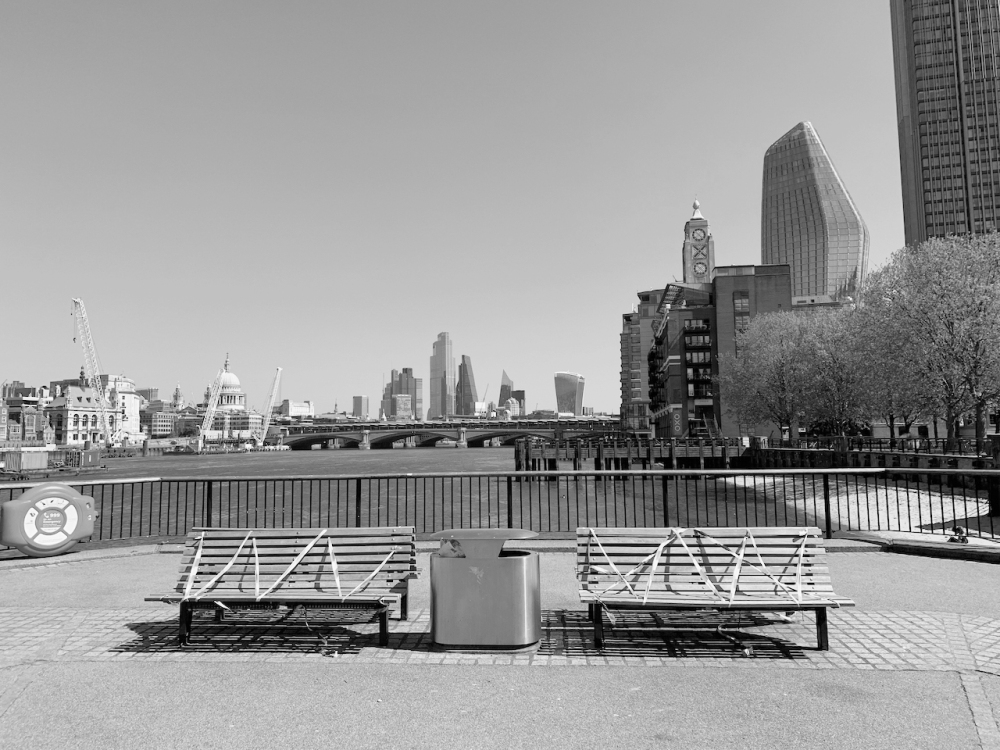 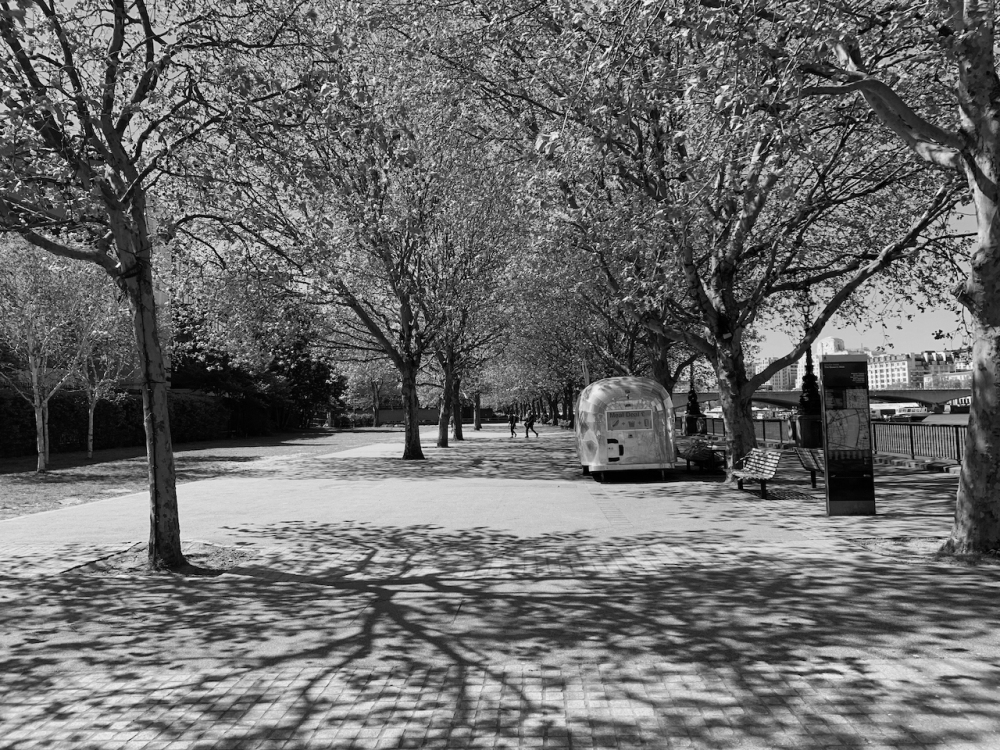 As I walk towards the London Eye, the nearby park normally invisible for the crowds of people covering it so naked now, I find myself wondering whether this window I am looking into (framed by the camera of my mobile phone) is our past or our future. Am I seeing once again the old Southbank in its pre-tourist era, which I remember well enough, or else feeling my way inside an architecture masterplan in life size, still waiting to be populated by its future visitors. Either way there is an aspect of utopia in what I experience.

The presence of my daughter running through some of these images, a tiny person within the huge city scape, makes a difference. This figure to me is like one of those wild flowers breaking through concrete in a road.

I chose to desaturate the images, partly because I find the colour of blue sky trivial. But additionally, also because I believe that this way, in black and white, the images invite the imagination in to do the colouring. And once imagination has entered, it will stay and might read or draw other layers of narratives onto these empty sets.

As Jan Svankmajer reminds us, imagination is subversive because it puts the possible against the factual.  So don’t just EAT.